John Nomland sold his modern poetry collection to Hugh Miller in 1977. The lot was said to comprise of 30.000 titles. It was packed in 652 boxes and was duly delivered to the premises in New Haven Ct. Sixty boxes were found dented upon arrival, but no damage to report. John Nomland was a librarian and bookseller, also the son and brother of Kemper Nomland, modernist architect father and son team. In his correspondence, safely housed at special collections at UCLA, he presents himself as a weekend bookseller and a weekday librarian for the Los Angeles City College, today known as Los Angeles Community College.

Librarianship may have been in crisis there. There were disputes if the Encyclopedia Britannica would be appropriate for the library, or if their students would better be served by the less demanding World Encyclopedia. Somehow this inner city college library gave its librarian enough time to venture into bookselling. Big time.

The bookseller's archive at UCLA  is substantial: 26 boxes (13 linear ft.) of archival material. About his work for the library we know very little. Just imagine the conflicts of interest that are bound to occur when librarian and bookseller is the same person. Imagine you deal with a publisher in your official capacity, and then you add a PS in your private capacity. That earns you a great discount right from the start. Imagine you want to sell to another library and you can do so with colleague and librarianship credentials. No end of temptations, it seems. Well, it's nice if you can get it.

Nomland did have some issues. He disliked the smell of deceit. Some UK publishers would issue lists with prices in £ and $. Currency rates being what they are, he was keen to buy in £, even if he resided in Los Angeles, and that led to some cancellations and returns, if UK publishers would not play ball. The correspondence include disputes about discounts, anger about rogue booksellers taking advantage of him, and the memorable "I guess I just had my second unfortunate experience with you," addressed to a colleague, George Milkey - "but I do not intend to be victimized." Rogues all over!


Our Nomland also wrote a book on the Teatro Mexicano Contemporáneo: 1900 - 1950 (1967). It was based on his 1957 UCLA dissertation, which was written in English. He was travelling often across the California border for his book expeditions. Here is one of his Mexican additions.

His business letterhead and the library letterhead alternate in the archive, but the matter is always the commerce of printed matter:

In 1977 Hugh Miller took on the entire collection of his poetry and small press books. Adding up the books must have been quite a challenge, as we can see from the calculations here. 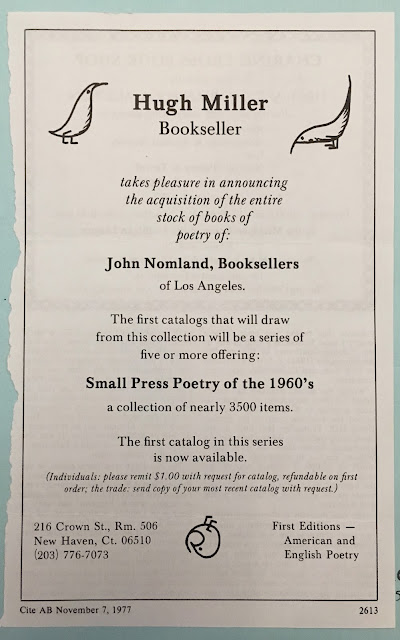 But what happened to the rest of his collection? A colleague and friend reports that his estate was well ordered, after his death in 1988. The widow apparently had detailed instructions about what each book was worth. My friend was unable to buy from the front rooms with shelves of high expectations. So he asked to see the garden shed. There he found a collection of Spanish language material, mostly poetry, but also political and local history. He got that lot and sold some of it in Los Angeles. I think he was a little intimidated by the material, so he put it into the side room, closed the door, and showed it only to the occasional visitor. Occasionally. 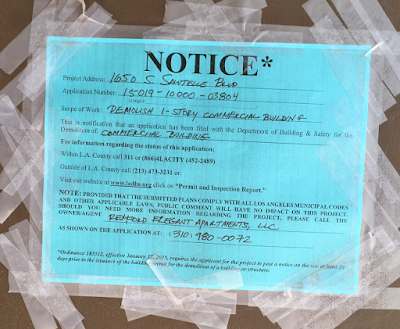 Then came Rexford Elegant Appartments LLC. His bookstore faced closure because the shop premises are being developed. I helped him with this Wunderkammer, and the Spanish language material is now available at this link.